The East of England Farming Conference was back with a bang!

Home » The East of England Farming Conference was back with a bang! 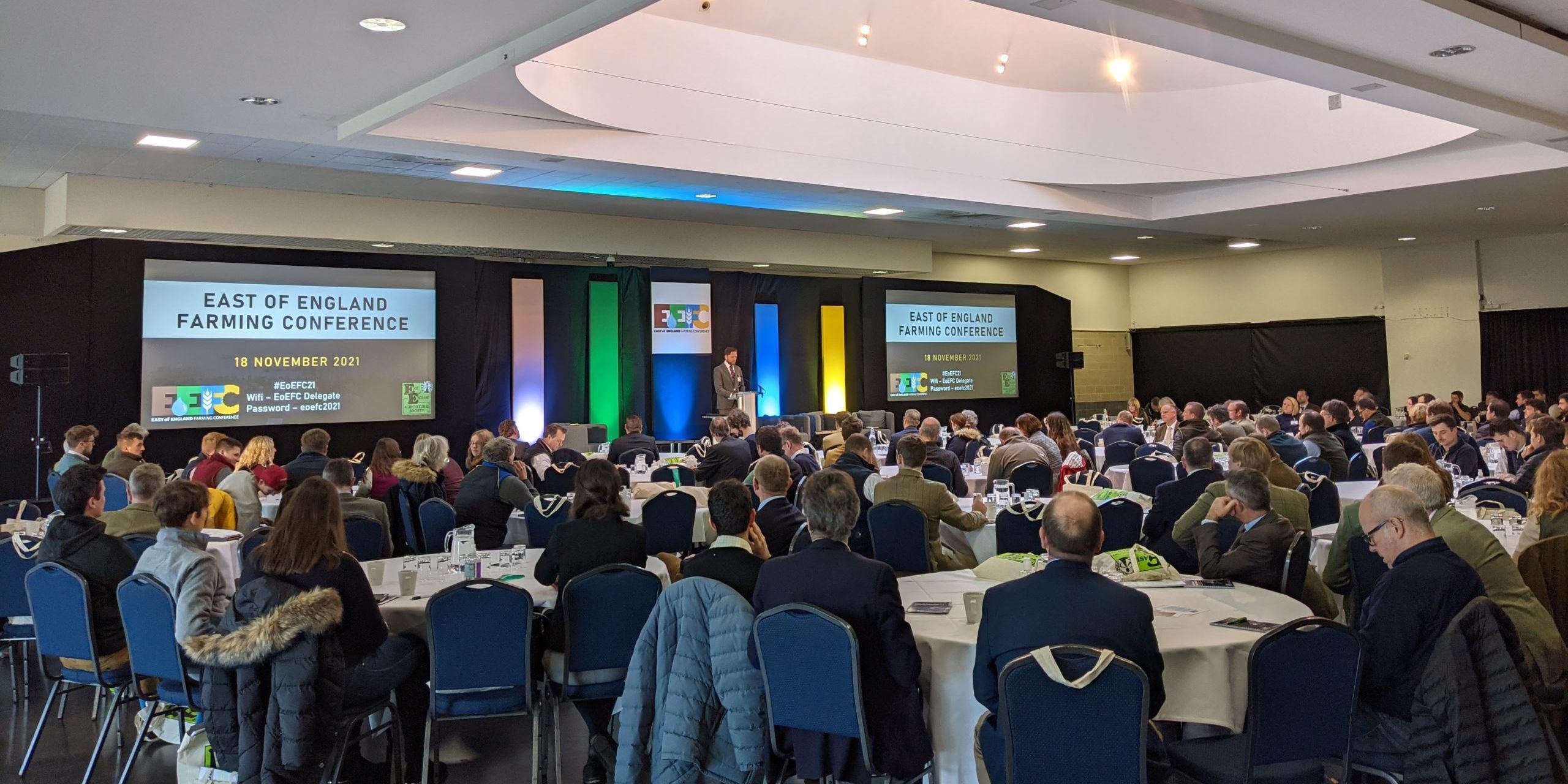 On the 18th November 2021, over 200 farmers, local business people, speakers, sponsors, trade stands and special guests arrived at the Showground for this year’s East of England Farming Conference. It was a welcome return for the East of England Agricultural Society to be able to once again resume their programme of events.

After a rousing welcome from the conference chairman, Tom Martin, the day commenced with a ‘Decision Makers’ session chaired by local farmer, conservationist and author, Joe Stanley. Lord Benyon was the first guest speaker, laying down the plan for the implementation of environmental land management schemes stating that farmers and the government need to work together to create a holistic package and that big changes are on the horizon such as “farmers will not be using diesel in 15 years.”

The next speaker was Lord Deben, Jon Gummer, who highlighted the importance of animals to produce healthy soils in the fight against climate change and that “veganism is not the answer, but instead the opponent to climate change mitigation.” The session was rounded off by Professor Tim Lang, whose passion for transparency shone through calling for “shorter supply chains and better bioregional infrastructure” to help secure our national food security. We also witnessed a fantastic debate between our three speakers uncovering problems and opportunities within our approach to backing British farming.

In a change to past conferences, the second session welcomed conflict resolution coach, Richard Savage, founder of Savage Macbeth to lead a negotiation-based masterclass. The session was sponsored by Oxbury Bank and started with an introduction from the Managing Director of Oxbury Bank, Nick Evans. Richard’s opening story of ‘the day that he died’ captivated everyone’s attention and he continued to enlighten and educate the audience in the dark art of negotiation and the key signs to look out for.

The lunch break presented a great opportunity for networking with a number of our sponsors and trade stands alongside a locally sourced hot meal. We were proud to have Norfolk chicken, Lincolnshire (Boston) beef and English pumpkin curry on the menu to reflect our support for British agriculture.

‘Cost Out, Cash In’ was the title of the afternoon session, chaired by Teresa Meadows looking at ways to reduce your input costs and benefit from other areas schemes such as trading natural capital. Simon Cowell, a biologically focused arable farmer from Essex opened the session talking through the steps he has taken to enhance his soil health and hence removing the need for applying phosphate, potash, lime, slug pellets and growth regulators. Agrii agronomist, Mark Dewes followed Simon’s presentation and weightily pushed the point of reviewing your own businesses reliance on inputs as “an overreliance makes us more vulnerable to price and other considerable shocks.” Keeping the conference line-up in the family, the final speaker was the son of Lord Deben, Ben Gummer. Ben’s engaging presentation helped answer some of the questions surrounding carbon credits and natural capital but also uncovered problems with the schemes such as “are we measuring process or outputs?” and highlighted a key conundrum in that “we don’t actually know what soil carbon is.” This session also finished with a discussion including several questions submitted by the audience.

The day concluded with a post-conference drinks reception with local beer from Nene Valley Brewery, creating a final opportunity to network and ask the speakers, sponsors and trade stand some last-minute questions.

On behalf of the conference organising committee, we would like to thank all of our speakers, trade stands, guests and delegates for making it such a successful event. We would especially like to thank our sponsors, British Sugar, Brown&Co, Hutchinsons, John Deere & Ben Burgess, NFU Mutual, Oakbank Game & Conservation, Opico, Oxbury Bank, Roythornes, Soil Fertility Services and TC Bulley Davey for their fantastic support and for making this year’s event possible.